On January 15, 2016, seven athletes signed with East Georgia State College’s baseball program. The students are joining EGSC from six different high schools across the state.
“I would like to credit our Recruiting Coordinator, Dusty Hess, for doing an incredible job with this year’s class,” said Head Baseball Coach Matthew Passauer. “Given the fact that he did not start at East Georgia until September, Dusty has been a true road warrior this fall, finding us a very talented 2016 class.”
Joining EGSC from Baconton Community Charter School is Jackson Taber Raley. He was named 2014 MaxPreps Underclass All American, 2015 Perfect Game Honorable Mention (Underclass All American), was named to All Region 1-A three times, was Region 1-A Pitcher of the Year two times, named to the Albany Herald All Area 1st Team two times and was on the 2016 GHSA Pre-Season All State 1st Team.
“I chose EGSC because I was really impressed with Coach Passauer’s vision of the future for the baseball program. I feel like I can learn a great deal about pitching from him, and that he will challenge me to rise to another level,” he stated.
“In the classroom and on the field, Taber has had a pretty special high school career so far. He has won two Region Pitcher of the Year Awards, and he is going to come in with numerous college credits under his belt already,” said Coach Passauer. “We will be looking forward to Taber coming to Swainsboro and continuing that same success.”
From Bryan County High School is A.J. Wiley, who chose EGSC because it was close to home and he liked the coaches and their ideas about the students’ futures. He has earned a Defensive MVP award, offensive MVP over the fall, and made the top 100 over the summer.
“AJ is a physical corner infielder with potential to hit in the middle of our line-up,” said Coach Passauer. “From everything we have heard and witnessed, AJ will also be a potential leader on the field. He has a high baseball IQ, which will be another great asset.”
Joining EGSC from Harris County High School is Matthew Becker, whose credits include being named 2015 Perfect Game Fall Academic Top Prospect and 2015 PG Fall Academic Top Velocity Record.
“I was thrilled during our visit with Coach Passauer and knew right then that EGSC was the right place for me,” he said.
“Matthew is a very exciting prospect that will come in as a potential two-way guy with a lot of upside. He has exciting pop in his bat and he has loose easy velocity on the mound,” said Coach Passauer. “From day one, we were excited watching Matthew play, and the excitement only grew as we got to him and learned what a great kid he is.”
From Northside High School are two players, Gage Brown and Drew Haywood. Brown says he chose EGSC because he felt welcomed from the second he met the coaching staff. Haywood, who was named Rookie of the Year his freshman year and Pitcher of the Year his sophomore year, as well as earned a batting title junior year by leading his team in home runs and RBI and being named First Team All Bi City Award his freshman, sophomore and junior year, rounded out his accomplishments by being named to Second Team All-State. He chose EGSC because he felt the school would give him a chance to succeed on the baseball field and in the classroom.
“Gage is a multisport athlete who is going to add athleticism and a plus arm to our outfield. Gage has a significant amount of raw ability which makes it very exciting to watch him develop,” said Coach Passauer. “Drew is going to come in as a high level two-way player. He had some strong Division 1 interest early in high school before he ran into some arm issues, but he has come off that very well and the future looks very bright for him.”
Braxton Johns is coming to EGSC from Statesboro High School, and says that the coaching staff and his excellent relationship with Coach Passauer is what drew him to EGSC. “I like that EGSC puts me in a position to contribute immediately,” he said. “The school provides the opportunity to grow academically and athletically that I was looking for.”
“I have been fortunate enough to know Braxton for about a year and a half now, and he is definitely a kid who has character, work ethic, and motivation,” said Coach Passauer. “He has excelled on the travel ball circuit as a shutdown arm out of the bullpen, and he is able to come in and compete in the zone with loose side arm mechanics that make it very tough for hitters.”
Joining EGSC from Perry High School is Parker Stahlman. He was named First Team All Region Baseball, First Team All County Baseball, First Team All Middle Georgia Baseball, was ranked sixth in the state in MaxPreps AAAA Batting, and was named Class AAAA Pre Season All State First Team by Georgia Dugout Magazine. He chose EGSC because he was impressed with Coach Hess’s enthusiasm for the program’s future. “I would like to contribute in helping to build a winning program,” he said.
“When we look for outfielders, we put a high priority on speed, as well as players who can come in and be really aggressive on the base paths,” said Coach Passauer. “Parker goes above and beyond in both categories, and he will be a perfect fit for us athletically and academically.”
Passauer is looking forward to the future with these new athletes.  “What excites me most about this class is the quality of individuals we have been able to target,” he said. “We are signing seven  high-character young men. We are fortunate to be bringing in guys with strong baseball skill sets who also have strong character traits such as work ethic and motivation. It is an exciting time to be a part of Bobcat Baseball!” 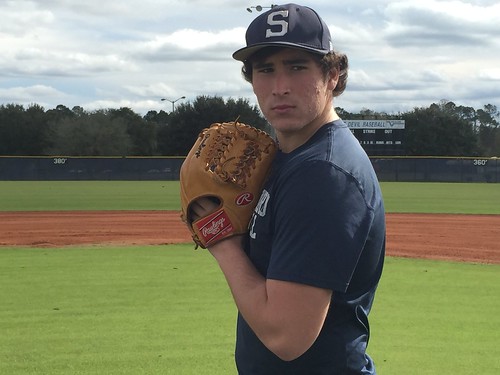